I originally wrote this section from a tent in a car park just a small distance south of one of the bridges to Rotterdam. It was the fifth day of my journey and it still feels like I’ve just set off.

Day One: I left on the 10th July 2011, a Sunday. The previous week was spent meeting up with as many friends as I could arrange for a chat and a drink. The week built up to Srini and Sandhya’s wedding. On the Sunday I packed up all my stuff onto the bike and set off, accompanied by my Dad and Connor, on my dads bike, and Chris. We rode down to Derby and found a pub for a drink and some snacks, then parted ways on the M1 junction as I headed off towards London. The traffic wasn’t too bad until I got about 50 miles outside London and then crawled the rest of the way. I arrived at David’s house late in the afternoon, unpacked and headed to the pub for a couple of drinks and a chat before heading back and getting some sleep. 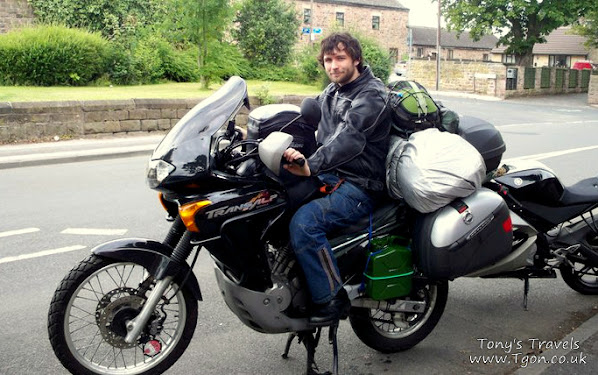 Day Two: David had to work so we left the house and headed into London. After leaving him at his office I walked the short distance to Regents Park and wandered around wandering what to do. I decided to do some geocaching. I found a couple of geocaches and then went to all the main London tourist spots taking tourist style pictures, then sat down in a pub for a couple of pints of Guinness. I headed back to meet David, went back to his for tea and went to bed.

Day Three: I woke up feeling a little nervous but ignored it and concentrated on packing the bike. I said goodbye to David and set off towards what I assumed was East, until I met the M25 and followed it until I saw the signs for Dover. As I got closer to Dover the wind picked up but it was fairly constant to easy to counter. I arrived at the port and was told that the next ferry was in an hour. I checked in early and managed to talk my way onto the earlier boat which set off immediately. Once we arrived in France I followed the signs for Paris and got into the city just before dusk. It was at around this time I realised how much I hate driving in Paris. The traffic is constantly in a jam, there is an aweful one way system and I was too hot. After wasting alot of time driving around I decided to get some petrol and stayed in a small hotel in a bar outside Paris. I dropped my bags in the room and went into the bar, sat on a stool at the bar and stretched the limits of my French while having a couple of glasses of beer.

Day Four: I woke and took a shower before heading back into Paris, took some tourist style photo’s and went to visit the grave of Jim Morrison. After managing this I then set off to get out of Paris, which again wasted alot of time and got me hot and angry. Once i finally got out of the city I headed North towards Brussels. It was around tea time when I crossed the border into Belgium and decided to make camp. I turned off the motorway and looked for a quiet place to set up my tent. I found a nice spot just out of sight of the road, set up camp and cooked myself some pasta, playing some guitar before I went to sleep.

Day Five: I was a little lazy when I woke up and layed in bed for a little longer than I should. When I got up and started packing it started to rain, I got everything strapped onto the bike and put on my waterproof clothes before setting off back along the motorway. I got into Brussels and drove around for a little while without seeing anything of interest, so I stopped at the petrol station to top up and asked the lady in the station if there was anything to see, she said no so I set off towards Antwerp. I drove through Antwerp and didn’t see anything great so decided to head to Amsterdam. I was driving up the Motorway when the weather got really bad, the wind was coming in occasion but very strong gusts, three times I was blown off the road into the hard shoulder. The third time I decided to stop for a rest, I pulled into a petrol station with a rest stop, had a coffee and looked at the map. A little way north was the bridge to Rotterdam, if the wind was bad on the road it would be worse on the bridge, so I set up my tent, got out of my wet clothes and cooked some food feeling that I had made the right decision in staying put I went to sleep in a good mood.