The drive from Prague to Auschwitz took longer than I thought it would, the roads in Czech Republic were good and I managed to keep a good pace all the way to Poland. Once I crossed over the border there was a definite change, the roads were uneven with a lot more bends. I had prepared a route which seemed simple enough to follow, the only problem was that once I arrived in a small town I was supposed to take a road from there to the Auschwitz museum I found that there were three different roads all with the same number heading in different direction.

I stopped a few times to ask directions and managed to get fairly close, this is when I met a guy riding a CBR 1000, he said that he was heading the same way and I should follow him. I followed him to the museum and we stopped and had a brief chat, he was a motorbike mechanic and had done some touring on his bike. He offered to give me his mobile number so that if I ever had any problems while I was in Southern Poland I could call him. I explained I didn’t have a working phone but thanked him and gave him my website address.

I went into the museum car park and met the attendant, a Polish guy with one arm who spoke no English. We went into the on-site hotel so that the girl on the desk could translate. I explained I wanted a very cheap place to stay, they suggested the hotel, I explained it was too expensive and asked if I could sleep in the car park. The guy said I could but that it would be cold and I would need to pay for parking, a little less than 3 Euro. I agreed but then when we left the hotel and went back to the car park he changed his mind and said I could stay for free. 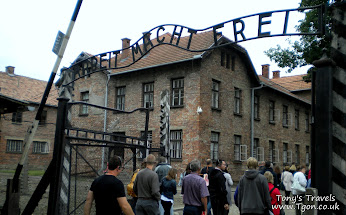 This morning I woke up, packed up the camp and headed into the museum. If you go between 9 and 10 you can walk around on your own for free, I went at 10 and had a guided tour. After the Museum I headed to Krakow. There wasn’t much to do there so I didn’t stay long and headed south into Slovakia. The border here is really nice, as I got closer the road climbed up into the hills and I could see the rain clouds ahead. I managed to get my water-proofs on before I got into the rain but then had to drive slowly, trying to concentrate on where I was going with rain, condensation in my helmet, and awesome scenery all around.

I crossed over into Slovakia and decided I wanted to stay in a hotel tonight instead of having to put the tent up in the rain. I drove until I found one and stopped, its reasonably cheap but is a beautiful building in the hills. I’m sat here now having eaten a pork stew type meal and a strudel, drinking a beer in front of a log fire with relaxing music on in the background, trying not to fall asleep yet.

Tomorrow I’m driving through Slovakia to Bratislava and I plan to spend 2 nights in a very cheap hostel while I explore the city.