I have spent the last two days and nights in Bratislava, the capital of Slovakia. I drove down from the beautiful hotel in northern Slovakia, almost running out of petrol on the way due to the rarity of petrol stations on the Motorway, and checked into Patio Hostel. The first night I met an Australian guy called Andy and an English girl called Kirsten. We decided to go out for some drinks and were joined by three French guys, Valentine, Arthur and Jan. They were taking part in an event where they were driving around Europe in an old car they said was called two horses. In the event were nine teams, each driving one of these cars, with four people in each car, they were leaving Bratislava at 5am the next morning. They gave me a few tips of good places to visit in Romania so I’ll try to look into them when I get there. So the six of us headed off into Bratislava and went around a few bars drinking and having an amazing evening. 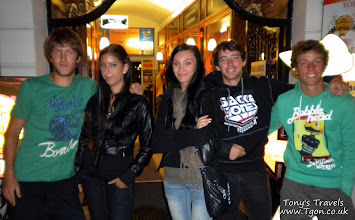 The next morning Andy, Kristen and I were joined by Lars, he is a student from Denmark who was also staying in the same hostel as us. We headed out into town to take part in the free tour. The tour was great and lasted about 2 hours, we walked through the city being told about the important buildings, the history and culture of Bratislava. There was an orchestra playing in one of the squares which made for a great atmosphere. After the tour we walked up to the castle and looked down over the city, the view was really good but I think it would have been nicer to look back onto the old city rather than the new.

In the evening the four of us headed out to Slovakia Pub for some food. The food was the tastiest food I have eaten in ages. We had Goulash with dumplings. After we had eaten we headed out to find a relaxing bar with comfortable chairs. We ended up in a cocktail bar, this is where we met two guys who were on another amazing trip. 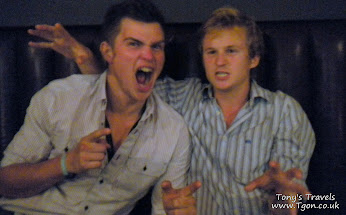 These guys, Ed and Mark, were travelling through Europe on pedal bikes. They were riding from the North Sea to the Black sea, they started in Holland and followed the Rhine through Germany and France, they are now following the Danube all the way to the Black sea. 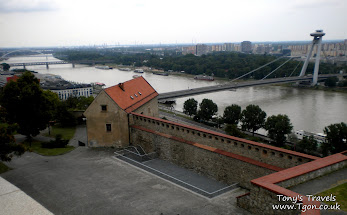 We spent the night drinking in bars around Bratislava and listening to the live music in the bars. Bratislava is a great city for the history, the food and the drink. The history is free and the food and drinks are very cheap.

I’m leaving Bratislava today and travelling the short distance into Austria to visit Vienna for the afternoon. This evening I’m planning to camp somewhere fairly close to Vienna and then head to Hungary to stay in Budapest tomorrow.