I have had a great week and an awesome weekend. The last time I updated the blog I was just about to go out for my last night in Budapest, we ended up visiting three or four ruin bars, finishing the night in szimpla (The best ruin bar). There were six of us out, me and the Dutch guy, the English couple and two new people, an Indian guy and a girl from Finland. The next morning I woke up with a terrible hangover and had to check out, luckily they let me stay in the common area of the hostel for a few hours to normalise before I headed out again. 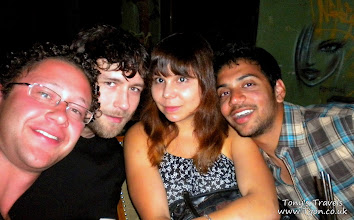 The girl in reception suggested I headed up to Debrecen in northern Hungary to see the beautiful natural landscape, so I headed up there and looked for somewhere to camp. I turned off the road and instantly got stuck in some mud, Debrecen is in a national park and is completely flat and all muddy marshland. I flagged down a passing truck and the driver helped me out of the mud, I remembered that I had seen a camp site next to a petrol station I passed and turned back to find it. As I was negotiating a price two other motorbikes pulled into the car park. They were being ridden by a German couple who were also camping, so we decided to camp together. 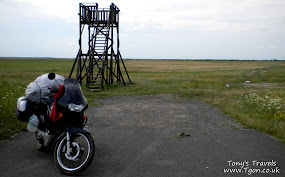 We cooked some food and had a beer while we talked about our journeys. They had just come from Romania and so they offered to give me lots of advice for my time there. They recommended some good roads with great views and by the end of the night I had a route planned through the country. They warned me about gypsies, wolves, bears, wild dogs and terrible roads. Leaving me with a little more to worry about than the no worries that I had had previously. We headed to bed and the next morning we had breakfast and went our separate ways.

I headed into Romania and bought a road map at the first petrol station I came to, it was the first one I have bought but with my plan being to head through the mountains I wanted to make sure I knew where I was going. I headed out of the city and turned up into the mountains, the views were great and so was the weather. When I stopped for lunch I was in a small village, there was a small shop with some benches outside, I got a sausage and some cherry croissants and sat out front with a beer. There were some old guys sat out front who started trying to talk to me, they didn’t speak English and I didn’t speak any Romanian but we talked for about 30 minutes before I set off again. 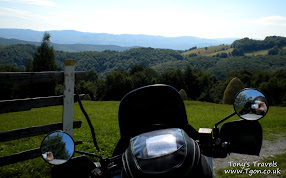 I passed a sign for a camp site and decided to call in and see what it was like. Basically you could camp in the garden of a small hotel, the hotel was really nice and the owners grew their own vegetables and had some chickens for eggs. I was the only visitor when I arrived but by the time I had set up my tent another group of people had arrived. Two Romanian families from Bucharest, the husbands were both university professors. They called me over and offered me some shots while we introduced ourselves, after the shots they invited me to join them for dinner. They gave me some other places to visit while I was in the country, one of which being Soghisoara, a small medieval village fortress which is still the last remaining village of its type to still be lived in. 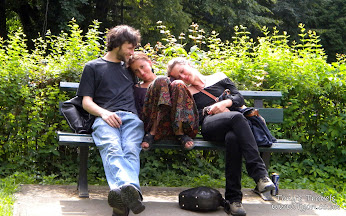 While we were eating dinner another group of people arrived, 8 bikers from the Czech republic who were on their way home from the Ukraine. We all sat and drank and talked until it was time for bed and we all went to our tents. I had altered my planned route to include the places mentioned by the guy over dinner so the next morning I set out through the mountains, headed for Soghisoara. When I arrived I drove around looking for somewhere to sleep but ended up in a motel about 20 minutes walk from the main village. I dropped my bags off and had a shower before heading out to the fortress.

I was walking around the outside walls when I crossed paths with three Romanians who were trying to get into the village without paying. It was at this point when I found out that there was a medieval festival going on and you had to pay to get in. I decided to join them in their search and we headed off to a road that I had seen while driving around earlier in the day, on that road we bumped into a group of about 6 Romanian guys also trying to sneak in. We decided to head into the graveyard, jumped over a fence, went through a different graveyard and then we were inside. The festival was great, we walked around looking at the stalls, the costumes and the mock battles before heading into a bar for some beers that cost about 75p each. After a short while we ended up sat in a back room with about 20 people, a guitar, a violin and some percussion. Through the rest of the night we passed the guitar around, taking it in turns to play a few songs. 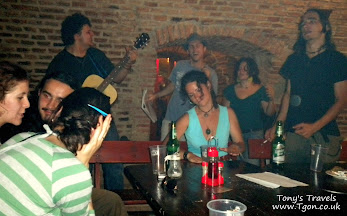 The Romanian girls (two of the three people I had met first) told me they were staying in a camp site for roughly £1 a night. By the end of the night I had decided to sleep in their tent at the camp site rather than going back to the motel. The camp site was buzzing with activity, there was a bar, a fire, loud music and vodka was being passed around. An awesome night. 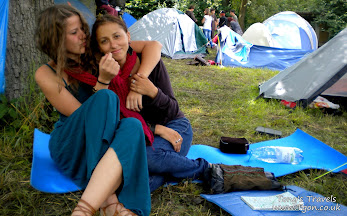 So yesterday morning I woke up after about four hours sleep, walked to the motel, collected my stuff, rode my motorbike back to the camp site and set my tent up. The girls had come to the festival to sell jewellery as well as have some good nights out and the rest of the camp site was filled with other people who were doing some sort of work at the festival. it was strange to wake up and look around to see lots of people wearing medieval clothes, but definitely cool.

The girls decided to just walk around and be a tourist for the day with me so we walked around, drank beer, watched the shows and again ended up in the same bar in the evening. This time we found that loads of people from our camp site had gathered in the cellar of the bar. We headed down and entered a smoke filled room where guitars were being accompanied by loud singing and fists banging on tables. We stayed there and sang along for a couple of hours before heading back to the camp site. Another awesome night. 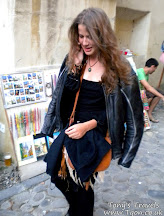 This morning we packed up camp and I headed off on my bike as they headed off on the train. The good news is that their home town is on my list of places that I still have to visit so tomorrow I will be going to meet them and staying there for a few days. Right now I’m staying in a hotel in Sibiu, looking forward to tomorrow. I’ll be driving over a high road in the mountains before driving to Bran Castle (The inspiration for Dracula) and then heading to Brasov to stay with one of my new friends for a while.

I have added pictures to the facebook group if you guys are interested in having a look through them.