Since my last update I have had quite a varied few days. Firstly I went back into Brasov and had a few drinks and found a geocache near the Black church.

A day or so later I travelled back on to the Transfagarasan and then hiked in the Fagaras Mountains with some friends. We hiked for 3 days and camped for 2 nights. The scenery was amazing and I got some great pics, which I have already added to the facebook group. 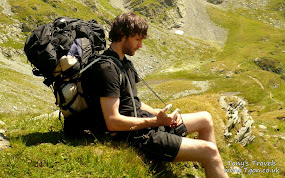 The only downside to the trip was that I wore shorts for half a day while hiking above the clouds with no sun cream. I get badly sunburnt and my legs went bright red and swelled up so that it was painful to walk. We came back down off the mountain and I rode my bike to a hotel and checked in for 2 nights, spending an entire day laid in bed applying after-sun to my legs.

This morning I woke up and had a shower, I noticed that the longer I stood up and moved around, the less my legs hurt. I decided to pack up and head to Bucharest. The journey took me through the mountains and at one point I was pulled over by the Police. They said that I had overtaken a HGV on a stretch of road where overtaking was not allowed, the punishment for which is having my license taken away for 3 months and a 200 Euro fine. As you can imagine I wasn’t very happy about this prospect.

I asked how I would get my license back, they said they would post it to the UK.
I explained I wasn’t going back to the UK, they said I could collect it in Romania.
I said that in three months time I will be living in Africa somewhere and explained that I am travelling the world, they commented that I must be rich to travel the world.
I pointed out that the line in the road which signifies that I cant overtake had been completely worn away and not repainted, they made a joke that life in Romania is so hard that someone had to take the line away to be used elsewhere.

I started to think that they were trying to get me to offer a bribe but I wasn’t going to risk offering one. Eventually they said that I seemed like a good man and that they would let me off this time, they returned my license and sent me on my way after I gave them my website address of course. (If you are reading this, thanks again)

After that encounter I continued to Bucharest and found a hostel, dropped off my bags and went for a walk. My legs were stiff from riding the bike all day and they had swollen up quite a bit so I decided to find a pharmacy. After some helpful advice I bought some hydro cortisone spray which also contains antibiotics, and some aspirin then went to explore the city. 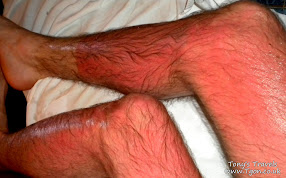 I walked around for a few hours and started to notice that if I stopped walking for even a few seconds my legs went stiff and as soon as I tried to walk again they were really painful. I headed back to the hostel, took my trousers off, sprayed my legs with the hydrocortisone, took some aspirin for the swelling and now I’m laid in bed with my legs raised. I’m hoping that they will heal quickly because the rest of my Europe trip involves beaches and hot places.