I left Romania last Sunday and headed into Bulgaria where I stayed in a hostel in Varna for two days. Varna is a very popular beach destination but was not really my kind of place, there were too many tourists and pub crawls. But I’m sure that foam parties, pub crawls and people getting so drunk they get naked are all very pleasurable in their way. The hostel itself was really cool, there was a nice outdoor area with a bar, another bar downstairs in the hostel itself, a cool chill out room and a couple of terraces as well as a great atmosphere.

After leaving Varna I headed south towards Burgas in an attempt to find Irakli beach. When I found Irakli I was a little disappointed at first, I had turned down a small road which was in a state of disrepair and drove down to the beach, so far everything was looking ok. Then when I arrived at the beach I found a hotel with a private camping area and a beach with tables and chairs, I had been expecting a hippy beach. I got off the bike and walked along the beach for a while when I spotted a lot of tents at the southern end of the beach. I got back on the bike and headed back along the badly kept road, then took a left onto an even worse road. A little way along this road I saw a dirt track leading off towards the beach, I took it.

As I drove along I started to notice that ever so often, in the trees, was a clearing with a few tents set up and a camp fire. I followed the track, looking for a place for me to camp, when I saw a few cars all parked together so I parked the bike and decided to look around a little. It was at this point that I met John, a German guy who was travelling around Europe with his friends Ben and Leon in a VW van, he was looking for a place to camp too so I decided to join them. 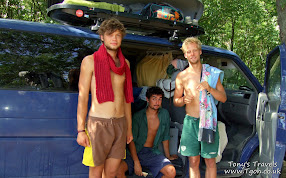 We followed the track further along the beach and found a perfect camping spot under some trees with a fire pit already made. We set up camp and headed down to the beach to swim and relax in the sun. The sea here is amazing, it is quite shallow for a long way out so the water is really nice and warm, it is also very clear, so the snorkelling equipment was put to some good use. The south side of the beach had some tents on it as well as there being tents up in the trees. 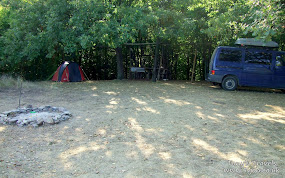 When the sun started to go down we headed back to camp to eat some food and have a beer. The following day we followed this same schedule only we had more time at the beach as we had already set up camp. The second night I slept in my hammock which was awesome, I should do it more often. 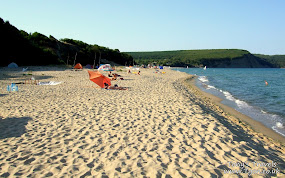 On the third day I decided to head down to Turkey so I set off around lunch time taking the coastal road as far as possible, then taking a small road through the hills to the border, there were lots of really nice looking spots for camping along this road (the 99 from Tsarevo to Malko Tarnovo) but I was hoping to get as far towards Istanbul as I could that day so I passed them by. I finally arrived at the border but after about 30 mins of trying to communicate with the border guards who spoke really bad English, I was refused entry as I didn’t have my logbook for the bike. This document was one of the documents stolen in the Netherlands, I now have a replacement but it is in England, I will be receiving it when I get to Spain.

Feeling quite frustrated I headed back into Bulgaria, on the way back through their customs, the guards recognised me and asked what had happened, I told them and said that I was heading to Greece instead, they suggested I drive back to Burgas and then down the main roads to the Greek border. I looked at my map and could see a road which cut the corner but the guards said it was a very bad road and I shouldn’t take it. I thanked them and drove off, I decided that a very bad road was just what I needed to take my mind off the refusal of entry so headed towards this ‘very bad road’. As I got to the start of the road there was another police man, he waved me on but I stopped to check my directions, again he advised me not to take the road but I said that the bike would be ok so he gave me the directions on the bad road and I set off.

The road wasn’t actually all that bad, there were some big holes in it and it was single track all the way, it was getting dark and in some places the trees completely shadowed the road anyway so it was very dark. The road stretched on and on through the hills with no signs of any villages or towns and my petrol was getting low. For a little while I was worried that I would get stuck somewhere out there and be stranded for days, but my worries were unnecessary and I emerged from the other side, found petrol and continued to my destination, a small town called Elhovo. I had only picked this location because it was about half way between the place I had tried to cross the Turkish border and the Greek border.

So I arrived here in Elhovo yesterday and today I’m heading to the Greek border to explore some of Greece for a while, Turkey can wait.