This is not about another encounter on a gay beach. I have been in Greece for over a week, at first I didn’t meet many people and when I did they didn’t seem to be all that friendly. But thinking back people have been friendly all the way through. Firstly there was the bar owner who let me camp behind his bar for three days for free. Then last week when I arrived in a camp site in Halkidiki, I met a group of Greek people who were on holiday there and began talking. We went for a coffee, then I joined them for lunch where they paid for my meal in exchange for my travel stories. 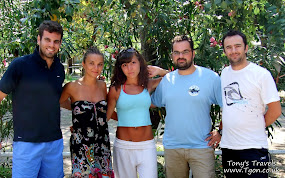 Then I had my first couch surfing experience in Thessaloniki, I stayed with Lara for three nights and had a great time. We spent the day time relaxing and then went out into the city in the evenings. She was a very friendly person and I’m sure I was lucky to get her as my first host. 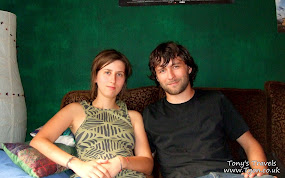 After I left Thessaloniki I headed up into the mountains near Mount Olympus. It was quite late at night when I arrived in a small village called Petra and began looking for a place to stay. I started talking to a few local people who were sat outside their house. They didn’t speak English but called someone who did and they translated. I explained that I needed somewhere to sleep and they said I could camp in the church yard. Just as I was finishing setting up my tent a lady came to me with a tray of food she had made me. There was a cheese omelette, some thick slices of home made bread, a big home grown tomato, a small block of cheese and two slices of home made cake. I thanked her and she left, I returned the tray before I left this morning.

Today I rode to Volos and at some point I developed an electrical fault on the motorbike. Most of the displays on the dash have stopped working along with my brake lights and my indicators. I have arrived in this city a day early so have nowhere to sleep. I stopped in Starbucks to use the internet to look for a place to sleep and also check for repair advice. While I was talking to the guy behind the counter he mentioned that he had the same bike as me. I asked him where he would go for repairs and he gave me an address to try. I then told him about my trip and mentioned that I was looking for somewhere to stay as my couch surfing host isn’t expecting me until tomorrow. He said he knows about couch surfing and offered to let me sleep on his couch tonight. Awesome.