My ninth week of travelling is over and I have arrived in Athens. After I last added a post to the site I stayed a night on the sofa of Apostolis, my friend from Starbucks, after we had been to a party at one of his friends houses. The next day we took my bike to the electrician, who seems to have fixed the problem even though he said he didn’t actually find anything wrong. In the afternoon I went to meet my second Couch Surfing host, Myrto. She Lives with her two flatmates Filip and Maeve, there was also another couch surfer, from Argentina staying there, she was called Sole. Sole took a really nice group photo of us all which I don’t have a copy of yet, but will add to the facebook group once I get it. In the evening we walked up to a village in the mountains, ate a meal and drank wine, then walked back to the flat. It was really cool but also very tiring. 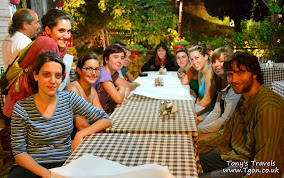 The next day I took my bike to a mechanic to get the front suspension oil changed. And then in the night we went to the University, where the students are on strike as a political protest. We sat and had a meal outside the University and then there was a party. The final day at Myrto’s I was really lazy and stayed around the flat most of the day. 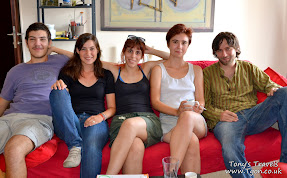 Then I headed down to Athens to meet my third Couch Surfing host. She lives in the posh area about 30 minutes from central Athens, it is called Kifisia. Afi, my host, is a Kite Surfer so today we went to a beach near Athens where all the Kite Surfers hang out. It was really cool and relaxing to be sat watching them all on the sea.

I will spend the next couple of days in a hostel in central Athens before I head towards the western coast of Greece and eventually Italy.