After I left my last couch surfing host I travelled into central Athens to find a cheap hostel. I drove around for about an hour, asking people for directions as I went, before I actually found the place. I checked in and went to relax in the room. Later in the day I was joined by a Japanese tourist who was travelling around Europe, we went for some food together and played some guitar in the room. 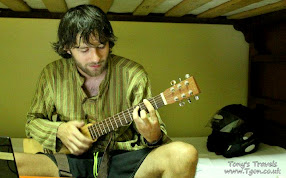 During the week I visited the sights of Athens to take some pictures, the weather was very hot and humid, this meant that I could sit and cool down while admiring the views. 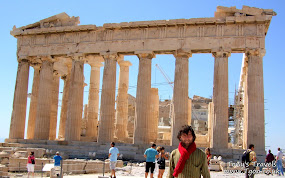 I arranged to meet with a couple of couch surfers in Athens for a coffee and a walk, this was a nice way to see the city. One of the girls was an American student who was studying music in Athens, the other girl was a local. We got some drinks and wandered through Athens, ending up sat on top of a hill looking down onto the city.

After leaving Athens I drove to Patra and camped there for a night before getting the ferry to Italy. I camped next to some German bikers who were very well travelled, they pointed out some extra planning that I need to do before I go into Africa. Firstly to get myself a carnet de passage and secondly to find out which borders between countries are open and which are closed, then plan my route accordingly. The Ferry journey was long and not very exciting, although I did meet a guy from England who had been travelling through Greece on his motorbike.

When I arrived in Italy I drove across the country to Naples. Driving on the motorways in Italy is stupidly expensive, I had to pay over 10 pounds to drive across the country from Bari to Naples. I plan to use smaller roads for the rest of my stay here. Over the last few days I have been staying here in Naples, eating pizza and drinking Peroni. Yesterday I went to explore the city with a couple of Spanish tourists who are staying in the same hostel as me. We ended up in the old castle on the hill above the city and got some good pictures of the city and the sunset. 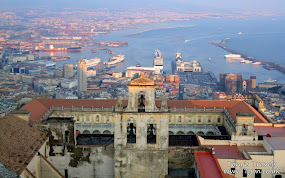 Today I am heading to Pompeii to camp for a couple of days before I head up to Rome for a long weekend.