Three months on the road and still loving it. This week I have managed to arrange couch surfing, although I have had difficulties doing this in Italy. I sent out lots of requests, some of which were rejected, most of them were just ignored. I eventually placed some posts in the SOS emergency last minute couch forums, this did the trick, I had offers from some very kind people.

Firstly I went to Bologna and stayed in a basic, cheap hostel for one night before heading to Parma to meet my first Italian host. Ian was a great guy with excellent English, he is planning a trip by canoe in East Asia, which sounds like it will be great. The first night we started talking about travelling and had some beers and suddenly realised we had been talking for around 5 or 6 hours. The second night we went for a walk around Parma to get some food and have a couple of drinks. Ian also suggested a route through Switzerland which I am looking forward to trying out.

My next hosts were a couple who lived in Padova, around 30Km from Venice. The night I arrived we went for a meal and some drinks in Padova, it is a really beautiful place but I didn’t take my camera out that night. The next day we went into town again to see the main tourist sights of Padova, the Cathedral of St Anthony and the town square.

In the afternoon I took the train into Venice and explored. Venice is like a huge maze of tiny paths and bridges, even with a map it is a real challenge to find your way around. After exploring for a few hours I headed back to Padova to rest. 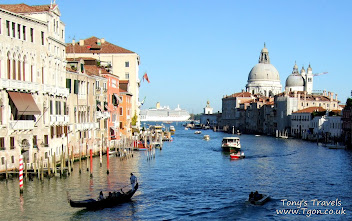 From Padova I headed to my third Couch surfing host in Verona. On the way I dropped into a small town which had been suggested by my second host Simone. There is a beautiful castle but unfortunately it was closed when I visited. I got a good picture anyway.

When I arrived in Verona I stopped for some pasta before heading to the village where my third host, Federico, lives. After I arrived we headed back into Verona, by car, to have some pizza with another two Couch Surfing hosts from the Verona area. Yesterday we both headed out on our motorbikes to Lake Garda, picking up another Couch Surfer on the way. The lake is really beautiful but I didn’t get any pictures this time, I will be visiting it again soon though so I can get pictures then.

I am leaving most of my luggage here in Verona while I take a trip around the North of Italy, then in about a weeks time I will head into Switzerland, then through the south of France, Andorra and Spain. I’m also starting to do more research on the paperwork that I will need for my trip through Africa.