Some of you may have noticed that the website has been updated, this is what I was doing during week 68. That and starting to work on my Africa Travel Story content, the site still needs a few finishing touches and the content will take quite some time. At the same time as doing this I have been trying to get the bike sold, I have one local guy who is interested but wont have to money for a couple of weeks and a guy who is looking into the duty costs before he makes an offer. I also had an offer from an Australian guy who offered half of my asking price, but this wasn’t nearly enough, but I have met a local guy who buys and sells vehicles for a living who said he will help to too, so fingers crossed.

Last weekend I came to Mabuya Lodge to use the internet and met some really cool people, the first were two guys, one from New Zealand (Richard) and the other from Israel (Jonathan). They met in South Africa and decided to travel together in a land rover, unfortunately they rolled it in northern Malawi and are now backpacking. At around the same time I met another group which was actually made up of two groups. One was an English girl called Gemma and a South African guy (Bryn), they are driving to South Africa from Doncaster in the UK, raising money for charity (http://www.facebook.com/2DoAfrica). They had teamed up with a group of five Americans who are also driving two cars down through Africa for charity (shoebaru.com).

The ten of us had a great few days together while they were waiting for one of the cars to be repaired, then they left for Zambia. After that I had a few days of feeling fed up, the weather turned cold (19 degrees) and the days were dark and cloudy. The fact that I had been having a good time with this group and then went back to the tedious day to day of waiting to sell the bike, didn’t do my morale much good. I guess that comes with spending my time in a lodge where people are always coming and going, while I stay behind trying to sell the bike.

There was a lot of drama going on in week 69, firstly one group I met, had been together for seven years and split up in Ethiopia, the guy wanted the girl to fly home so he could travel alone, but they are still travelling together. Meanwhile, back in my compound, one of my neighbours is planning to go back to Europe to make some cash and his local girlfriend told him that the relationship is over. She then went on to steal his passport and force him to go to the police with her, apparently if you live with someone in Malawi for six months you are officially married, when this didn’t work she said she was pregnant.

Then week 69 ended with the arrival of Danielle Murdoch (motomonkeyadventures.com), another Jupiter’s Traveller who rode from Australia, she is now travelling with a guy called Mike who has also been travelling in Africa for around two years. 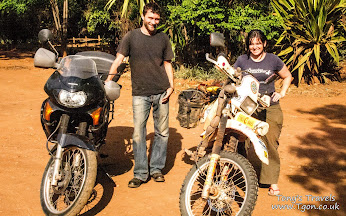 I have been thinking through my options and still have not been able to make a decision yet. Basically I have found out that I have to get my India visa from the UK, I initially thought about doing it through the post, but I am also considering flying to the UK for a few weeks to sort out the India stuff, then fly to India from there, this would mean I could potentially be home for my Birthday, Xmas and New year. I don’t really want to come back to the UK, so my other options are to settle down in either Zanzibar or South Africa while I send my passport to the UK, get the visa, then get the passport sent back to me. I am also pretty tired of Lilongwe, so I might try to advertise the bike in South Africa and drive down there to sell it if there is enough interest.