After selling my motorbike I headed straight to my current favorite place, Cape Maclear in Malawi. I’m staying in a great lodge called Malambe Camp (http://www.facebook.com/MalambeCamp), it is owned by a very friendly English woman and has some of the most friendly staff I have ever stayed with. I first visited this lodge around five months ago before I headed into Tanzania and stayed for around ten days, this time I have already been here two weeks and am thinking about staying here until my birthday on the 6th December. I would recommend this place to anyone who is visiting Cape Maclear.

I arrived here on the Monday of week 71 with two Canadian guys, one of which had been working in the camp in Lilongwe where I was spending most of my days. We hung around together for a few days before they had to leave, but as they left I met a really great group of people. Two German guys and one Australian who are riding bicycles from Cape Town to Nairobi (http://longroadup.blogspot.com/). These guys are so upbeat and positive that you have a great time just by them being around, I wish we could have traveled together for a while. We hung out together for a week before they left, heading north around the Lake towards Tanzania. A few days after their arrival we were joined by a group of three Israeli girls, we all spent most of our time together, going snorkeling in Otter Point (a really beautiful spot) and visiting the island in Cape Maclear. 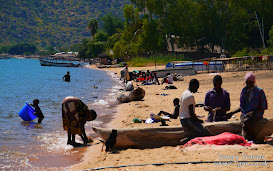 The German guys left at the start of week 72 so I spent most of my time chilling out on the beach with the Israeli girls. This week also brought the first rains of the wet season, the storms have been really beautiful and I have taken what I hope will turn out to be great videos. Unfortunately the first storm also killed my laptop. I left the laptop in the bar of Malambe thinking it was the safest place, unfortunately there was a hole in the roof and my laptop got quite wet. After a couple of days in some dry rice I tried to turn the laptop on and it is broken. I’ve taken out the hard drive so I hope I can get my data back when I arrive in South Africa… if I can force myself to leave Cape Maclear. Since then I have spent my days swimming in the lake, resting in the shade, feeding the Fish Eagles and taking a kayak out to Otter point, Perfection!