Before leaving the UK to travel through as many countries as possible, I thought it best to visit the countries in and around the UK. My family originates from Ireland and it is a place that I had often thought about but never visited. Having travelled around Scotland the previous year , I set off for a long weekend travelling around Ireland with my Dad on our Motorbikes. We set off from Sheffield heading through Oughtibridge and crossing the Peak District via the A616/628, locally known as Woodhead Pass. We then took the ring-road south around Manchester and the M56 to the border with Wales. We then followed the A55 across the northern coast of Wales to Holyhead and took the ferry to Dublin. We stopped for some lunch and a pint of Guinness in Dublin before heading out in an attempt to find a castle our family used to own almost three hundred years ago, Donore Castle. We took the M4/6 out of Dublin exiting at junction 4. It was at this stage we noticed a sign post which displayed the original spelling of our surname and decided to investigate. This is how we first visited Castletown Geoghegan, we stopped to have a look around the cemetery before moving off to in an attempt to find Donore Castle.

From Castletown Geoghegan we headed for a village called Horseleap, I knew that Donore Castle was located somewhere around the area. After stopping a few times to ask for directions to the castle we finally got directions to a farmers house. The castle is located in one of his fields, we asked permission to go take a look and set off across four fields to find the remaining tower. Although the castle had been inhabited as late as 1965, it is now in a sorry state. All the floors have collapsed but it was still good to see the place. 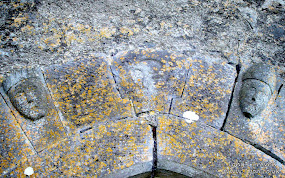 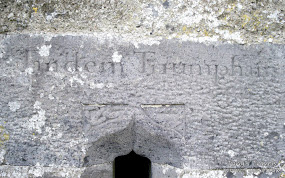 After visiting the castle we set off to a tourist spot along the River Shannon called Clonmacnoise, we arrived just before dusk and just had time to have a look around and take some pictures before it got dark. We set off in search of a B&B, we arrived at Shannonbridge but there were no rooms available, so we carried on through and ended up in a small town called Ballinasloe. We dropped off our bikes and bags and headed out for a few pints of Guinness before heading back to the B&B.

From Ballinasloe we took the M6 to Galway for lunch and another Guinness before heading south on the N18 to Limerick trying to find somewhere nice to spend the night. We ended up going straight through Limerick and taking the N69 west to a small village called Foynes. Foynes had been an airport for seaplanes and had a museum dedicated to this past. We spent a night in a B&B above the local pub after having a few more pints of Guinness and some food. The next morning we went to look around the museum before carrying on along the N69.

Leaving Foynes the landscape started to change for the better, until this point the countryside had been flat fields, nothing remarkable and not what I had expected. This finally started to change. We stopped a few times to admire the view of the River Shannon as it flowed out to sea. We followed the N69 to Tarbert and stopped at the Museum on Tarbert Island for a full Irish breakfast and a coffee.

From Tarbert we took the N69/70 south over the hills through countryside that was much closer to that I had expected to see in Ireland. Hills, Valleys, small picturesque villages and old houses full of character. The weather was ideal for enjoying the scenery and we stopped a few times along the road to take in the views.

On the N70 we turned off to take a break at a beach. Rossbehy is a beach on a long spit of land that sticks out into the Irish Sea. We got off our bikes to stretch our legs and have a cold drink in the sun.

It was from Rossbehy onwards that the beautiful scenery became even more idyllic. We took a small single-track country road up over the hills to rejoin the N70 stopping to look back down at the sea. As we continued along this coastline the scenery continued to impress. If only we had more time to take the trip, we could have easily spent a few days in each of the villages we passed along the sea front. Waterville was one such village.

Just south of Waterville the N70 climbs high into the hills as it curls around the end of the peninsula. The views from this road are spectacular, we pulled into a small parking area to admire the views looking down onto Derrynane More.

We got back on our bikes and continued along the N70, my favourite road of the entire journey. The beauty of this part of the country is comparable to the north west coast of the Scottish Highlands. We reached another picturesque village called Sneem and stopped to take a look around the gift shops. There were a few tourists around and some very welcoming pubs. Yet another place that you could easily spend a few days visiting if only you had the time. 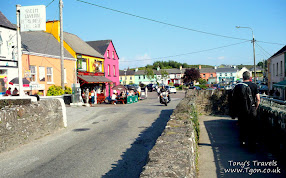 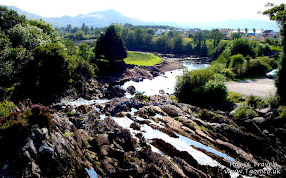 We took the N70 out of Sneem until we arrived at the N71 and took that road heading south, heading through the hills towards Bantry Bay. On the way there we spotted a small car park overlooking a valley, there was also a small tea room and a footpath leading to an old druids circle. We stopped here to stretch our legs before we carried on along the N71. 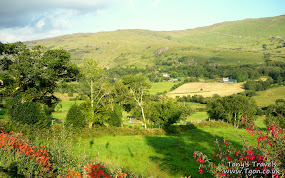 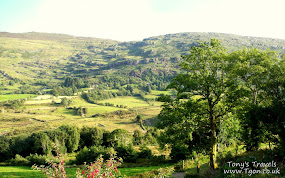 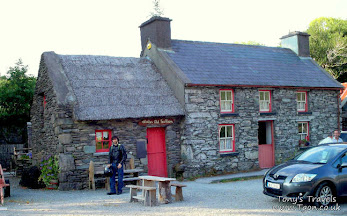 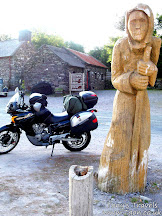 The N71 continues winding south through the hills and valleys and reaches the coast at Glengariff. From there the road follows the coastline around to Bantry. This is were we stopped again for a toilet break. By now it was mid afternoon and we had to start thinking where we were going to sleep, while keeping in mind the distance we would need to cover to get back to Dublin for the ferry.

Knowing that we were running out of time we headed inland, taking the R586 east towards Cork. As the light started to fail we found ourselves in a town called Bandon and decided to look for a bed and breakfast. What we found was an beautiful old house run by a very welcoming couple, Kilbrogan House. We had coffee and talked with the couple for a while before going for a shower and a good nights sleep. Knowing that the next day was going to be the longest leg.

We awoke early in the morning and went downstairs to enjoy a full Irish breakfast, packed our things and set off again along the N71. We circled around the edge of Cork and headed north towards Dublin on the M8/7. We rushed all the way to Dublin stopping only once to refuel our bikes. Arriving in Dublin about an hour early, we decided to go for a walk, get some food and a pint of Guinness. My dad had been to Dublin before and pointed out the statue pictured below. The statue is full of bullet holes, unfortunately too small to see on the picture. 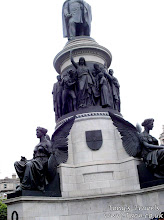 After eating we went to board the ferry back to Holyhead. We took a short nap on the ferry and then set off through Wales on the A55. At Chester we took the M56/60 taking us around the edge of Manchester, then the A628, or Woodhead Pass, through the Peak District. This time we took the A616 all the way to the M1, leaving the M1 at junction 34, Meadowhall. My dad heading back to his house and me heading back into Sheffield.