This week has seen a huge change in our method of travel, from Elmina we drove to Tema to meet the other people who are shipping their bikes. We arrived to meet the seven people and their six bikes (Heidi and Janz with their two diesel Enfields, Max and Marrian on their KTM, Hubert on his bike with sidecar, Charlie on his BMW and me with my Transalp) at the shipping office, we were a little late and they were just leaving the meeting. We soon found out that the bikes needed to be packed in to the container on Thursday, this meant we had to change our plans to celebrate Matt’s birthday in Peki. We stayed a night it a horrible little hotel in the port area and decided we didn’t want to stay there if it was avoidable, so the next day I took my bike for a wash and then headed to Kokrobite beach to meet Parisa and her friend. We spent the the night there but had to drive back to Tema and stay in the crappy hotel again so that we could be at the port for 8am Thursday morning. We arrived at the correct time but sat around for an hour or so before anything started to happen, eventually we were told we could start putting the bikes into the container, that took about an hour as each bike had to be man-handled into position. Then we had to wait another hour or two as they sent someone to buy lashings and someone else went to pick up the customs agent. When the customs agent arrived we were told he was the wrong guy and that someone else would come soon. We went for some lunch and sat waiting around for another hour or so. When the customs agent arrived he wasn’t happy that the bikes were in the container already so the shipping company bribed him and he signed off on the contents. Then we finalised the paperwork and paid £370 each, finally we were free to head up to Peki to meet Matt for his birthday, but on public transport as we no longer have our bikes.

We arrived in Peki and had some drinks to celebrate with Matt, then the next day we went to visit a disappointing waterfall nearby. The next day Parisa left Ghana heading back to Sweden, the rest of us headed north through Hohoe to Wli waterfall. This waterfall is supposedly the highest waterfall in west Africa, we hiked up to the upper falls and relaxed there before hiking back down to visit the lower falls, which is also home to thousands of large bats. After spending a night in Hohoe we headed south again to a monkey sanctuary in Tafi-Atome, went for a walk around in the forest feeding the monkeys and taking pictures. The monkeys are a little timid and although I had seen pictures of them climbing onto peoples shoulders to eat the bananas, we only managed to get them to eat from our outstretched arms. 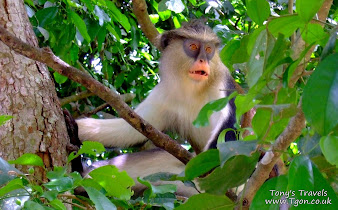 After we had finished there we got back onto some local transport (Trotro) and headed to the south of Lake Volta, while the minibus was quite full, we were also joined by a goat. I now have around three weeks before I need to be at the port in Namibia to collect the bike, so I am hoping to relax at a nice cheap beach in Ghana for a while before flying down to Namibia, maybe I can even arrange some couch surfing.