After staying with my first CS host in Mataram for just one night, I moved to my second host. A 24 year old local guy and his family on the edge of the city. We had a great couple of days hanging out with some of his friends and visiting the beaches. Unfortunately he was kinda busy during the week so I decided that I would head north to the Gili Islands for a few days and return to Mataram for the weekend. So I set off on a really beautiful, but really difficult stretch of road. The road follows the coast line past several really beautiful bays, the only problem being that each bay has a huge hill separating it from the next. I pushed myself to struggle over the first couple of hills, but then ended up just pushing the bike. This was made even harder because I cycle in flip flops and was so sweaty that my foot was sliding out of the back of them on the steep slope. I eventually got to the port for the local ferry to Gili Air and waited for the ferry to fill up before we could leave. 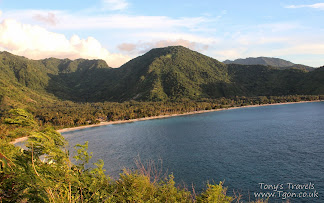 The Gili Islands are three small islands just off the coast of Lombok, the largest of the islands is a party island which attracts backpackers who want to surf, snorkel and dive in the day time, while partying hard at night. The middle island is very quiet and more traditional, but the island which is closest to Lombok, and the island I chose to visit, is Gili Air. I had heard that Gili Air is a happy medium between the relaxed Gili Meno and the party atmosphere of Gili Trawangan. Just as I arrived on the island I met another cyclist who had travelled to Indonesia from Hungary. He offered to show me a cheap place to stay so we headed over to the other side of the island where I set up my tent for less than $3 a night. The next morning I headed out to arrange some diving and see if I could find a place I could camp for free. That is when I found 3WDive, a small dive company close to the ferry port. For about $70 I did two dives with them and slept upstairs in their dive shop for two nights. The diving was great, about 25 meter visibility on the first dive and 15-20 meters on the second. We saw baby sharks, turtles and loads of reef fishes. It really wet my appetite for more diving, but I don’t think that will happen until I get to Thailand to do my DiveMaster course and maybe even an instructors course, so that I can earn some cash. I took the GoPro down with me on the dives but the footage isn’t amazing. I will see what I can do with it when I have some time to sit and sift through it. 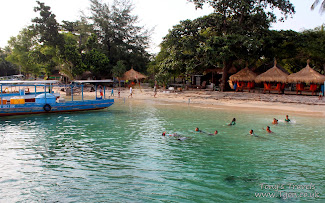 While I was on Gili Air, I had a little time to think about the rest of my time in Indonesia. At the time, I was planning to return to Mataram to extend my visa, head west through Bali into Java, extend my visa again in Jakarta then head through Sumatra to arrive in Singapore. The only problem is that you can’t extend your visa more than once (without ‘paying extra’), Java and Sumatra are big islands and will take a long time to cross. I decided that I needed to prioritise the rest of my trip in Indonesia. My new plan was to get a boat direct to Bali, from Gili Air, head to a town in the north to extend my visa. Then head west into Java, get a train part of the way so that I can see a stilt village that I want to visit, then visit Jogjakarta and Jakarta before I cycle to, and through Sumatra, stopping off to see some Orangutans on the way. So after making the decision, I headed off back to Bali and spent 2 days cycling to Singaraja to extend my visa. Now it is just a case of waiting for the unbelievably slow process of extending my visa. Which instead of taking less than an hour, like most other countries I have visited, this will take almost a week. Luckily I am staying with a really nice family who live close to the immigration office, this means I have fun things to do with the family while I wait, but also means I can cycle to the office each morning to try to push the process along (and steal a hand full of mints from the desk). 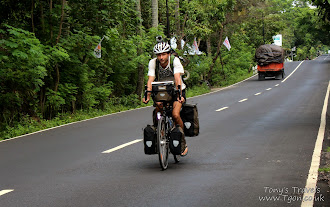