I didn’t manage to post last weekend so we have a double post this week. Last week I arrived in Togo, we drove straight to the capital city, Lome. The coast of Togo is really beautiful but short, it didn’t take long for us to cross the country and we were soon checked into our hotel and wandering the street stalls looking for food. While we were in Lome we met an American guy called Andrew, he had bought a motorbike in Dakar and was travelling around west Africa for a few weeks. We told him our plans to visit some waterfalls north of Lome and he decided to join us, so the four of us, Me, Charlie, Ida and Andrew, set off heading north. 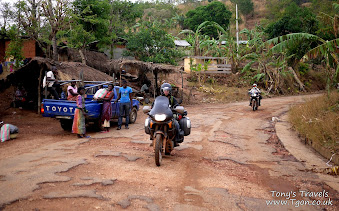 The first waterfall, close to Kpalime, was a bit of a disappointment, basically it was a moist cliff-face with lots of frogs, although it is supposed to be impressive in the wet season. We camped there for a night before heading to a different waterfall, the route took us through some awesome mountain piste, winding up and down through the mountain forests until we arrived in Badou, we decided to rest there for a night before heading to the waterfall. This waterfall was the tallest waterfall we have visited so far, the swimming wasn’t great but you could swim. There was a religious ceremony going on while we were there which continued for a few hours, after the ceremony the priest blessed the waterfall water and all the congregation stripped and went swimming in the falls. 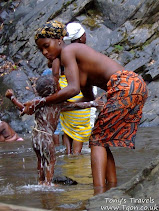 We slept at the waterfall that night and went for a swim in the morning before heading off back to Lome, then crossed the border into Ghana. We were expecting problems at the border because we were supposed to enter the country within a month of getting the visa, we were two weeks late, our visas were not technically valid. We lined up and eventually we were dealt with, nobody seemed to notice the visa dates and we were stamped in. The next problem was getting the vehicles in, all through West Africa we have managed to use Laissez-passer, but we had heard of people being turned away from Ghana unless they had a carnet de passage.

We walked up to the desk and we were asked for our papers, we passed over our registration documents and they asked us for our carnet. We explained that we didn’t have one and they said that Laissez-passer were only used for vehicles registered within ECOWAS, we couldn’t enter without a carnet. We asked if there was any way we could do it and they said we should talk to the boss. We were lead down some hallways and into a huge office with a massive desk at one end, sat there was a man in a very clean, smart uniform. We were politely introduced and our problem quickly explained, the man glanced up at us from the paperwork he was dealing with, looked at us for a couple of seconds then tilted his head back to the paperwork. With a wave of his hand he said “Give them it”, we were lead out of the office and back to the front desk, filled out the paperwork and were sent to pay for the Laissez-passer. This wasn’t the end of it, we arrived at the accountants office to find it locked, the accountant had gone home for the day. A boy was sent to the accountants house to bring him back to work, we sat there and waited, eventually he arrived, took our money, gave us our receipts and we were soon driving out of the customs area and into Ghana.

We spent a night in the border town before heading to the capital of Ghana, Accra, which brings us up to the start of week 34, and what a great week it has been. While we were in Accra we got a message from Matt saying that he was in a beach resort in the west, we had first met Matt in Bamako and he had come to stay at a couple of waterfalls with us in Mali, so the next morning we set off to meet him. We arrived and found that four of the people we are planning to ship to Namibia with were also staying there. The place was called the Green Turtle Beach Lodge and it was awesome, great beach, great food and best of all it was cheap, about £1.60 a night to camp. We chilled out there for a few days, during that time a girl called Parisa arrived, she is here on holiday and we hung out together at the beach for a while. 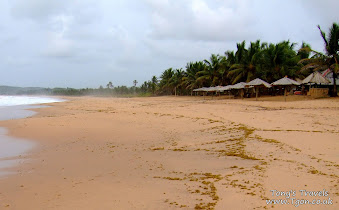 After a few days at the beach we decided to go to visit a stilt village called Nzulezu. Matt, Parisa and I took public transport and Charlie and Ida were supposed to travel by motorbike and meet us there. We arrived after two ours of road travel and an hour in a canoe, to find a beautiful, quiet little village on the lake. We dropped off our bags and were soon sat looking out over the lake with some locals, after a little more time we decided to take a swim in the lake. The water was warm and calm and the view was amazing, looking back at the village on stilts, with the forest behind it, a truly unforgettable experience. 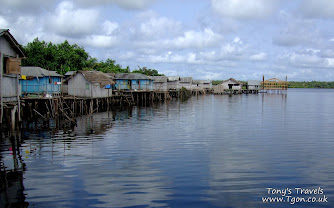 In the night we were given a canoe and the three of us (Me, Matt and Parisa) took it out on the lake. We knew the lake had crocodiles and while we were paddling around the edge of the lake in the dark, we were sure we could hear them, but we didn’t actually see any. The next morning Charlie and Ida arrived, we had some lunch and took a swim, we met another group of tourists who refused to join us swimming, as they had just seen a crocodile in the lake, it was only a small one so we weren’t worried, apparently they are afraid of people. After a little while we headed back across the lake in our canoes. After one last night in the Green Turtle we started heading back east towards Accra, we plan to meet all the people who are shipping to Namibia so that we can sort out all the paperwork. If this week is anything to go by, the next few weeks in Ghana should be awesome. 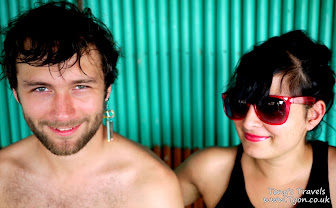