After arriving in Bali last week, I have been staying with my CouchSurfing host Sita. One of the first things that I noticed when I wandered around Bali was that there are so many beautifully decorated buildings and small temples for people to leave offerings in each day (as the main religion here is Hinduism). It really is a great change after a year of living in the very European culture of Australia. I set up my bike and repacked all of my equipment into my panniers, I am now sure, and relieved, that I have enough space for all of my stuff. I haven’t actually been out on the bike yet, because we have been driving around the south of the island on Sita’s moped, which has been a challenge as it is. I haven’t ridden a motorbike for a year while I was in Australia, but that isn’t the problem. Basically the moped has an automatic clutch, which everyone tells me makes it easier to ride, but as I am used to having a clutch I struggle with ‘slow control’ and changing down through the gears smoothly. The advantage of riding around on the moped is that I am getting used to the hectic traffic here and the different road rules. Basically if you see a space you take it and everyone else just adapts to your movements. The other drivers are used to that kind of thing, so they are alert and I haven’t seen any accidents, despite the amount of mopeds which drive so closely to each other. I also noticed that they actually use their horns for the correct purpose, letting people people know that they are there (when coming around a bling corner or overtaking someone who doesn’t have mirrors), rather that an extension of a shouting voice like we seem to in the UK. 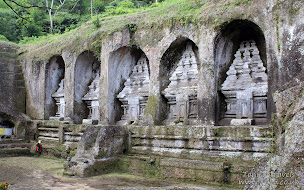 Each day we have been going out to visit different places around the area, only one of those days did we go to a beach, which I didn’t really enjoy as it was kinda dirty and overly crowded with sunburnt Europeans. On Wednesday we went out to an old temple called Pura Gunung Kawi, bathed in the river that runs through the temple and wandered through the rice fields that surround it. On the way back we stopped in another town called Ubud, where we visited the Monkey Forest and met up with another CouchSurfer for dinner. The Monkey Forest is an area of forest in Ubud which contains a couple of temples and is home to a lot of monkeys. I wasn’t planning to spend much time in this area of Bali because I had heard how touristy it is, but I am staying with my CouchSurfing host and avoiding the main tourist areas, eating street food and meeting local people. I am really enjoying it but I think I will move on soon, heading east and getting a ferry to the next island to the east, Lombok. But before I do leave I want to learn some Indonesian from Sita to prepare for the rest of my trip. 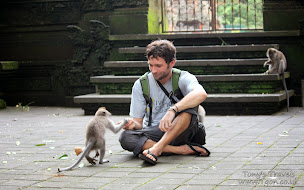