Last weekend we left Windhoek, heading south to Rehoboth before heading south west through the mountains towards the Namib desert and a town called Sesriem. Sesriem is on the edge of a national park in the desert, we arrived there after dark and set up camp. The next morning we got up at 5am to get into the desert for sunrise. We saw some Springbok and Oryx while driving out into the dunes, then we walked around in the desert for a while taking pictures before we set off back to the camp and then drove north back to Swakopmund. 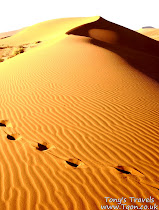 It was on the way to Swakopmund that I had my accident, most of the roads here in Namibia are not tarmac but gravel, graders drive along the roads helping to keep the gravel to a minimum. The only problem is that it moves the gravel into long strips running the length of the road. I was around 100Km outside of Swakopmund when my bike started slipping in one of these gravel strips, I had slipped before and regained control but this time the bike weaved and wobbled for about 60 meters then fell onto the left side, this is when I hurt my wrist and bashed my ribs, the bike slid down the road a little way, then flipped over onto the right side and landed on my foot. I got up and made sure I could still move all my joints, then picked up the contents of my top box, which were now scattered around on the road. After a few minutes a car arrived and asked if I was ok, the driver helped me pick my bike up, I repacked the top box and continued down the road, meeting up with Charlie after about 40Km. We drove back to Swakopmund and checked into a hotel, I limped into the room, took off my boot and my foot was swollen. We got some ice from the hotel and I took some pain killers, then rested with ice on my foot and wrist. 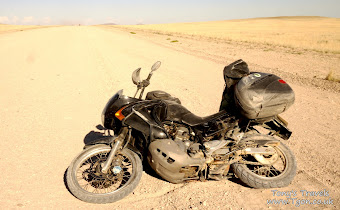 Luckily, when I woke up the next day my foot hadn’t turned black and blue as I had expected, everything still hurt but I could walk and ride. I cleaned the bike up and replaced the clutch lever then we spent two days resting in Swakopmund before heading north again. We headed to a seal colony in Cape Cross and were planning to take the main road to Uis, the people who worked in the sanctuary told us about a ‘new road’ which cut through the desert. We decided to take this ‘new road’ which was actually a decent gravel track until we got about half way into the desert, then it became tyre tracks through sand and gravel, which was hellish, my ribs hurt as I tried to keep the bike upright paddling through the sand but hurt even more when I had to pick the bike up again when I failed to keep it upright. It was dark by the time we reached the normal gravel road at the end of the ‘new road’ so we continued to Uis in the dark and found a camping spot. 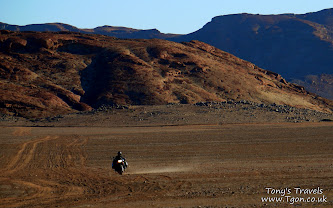 The next night we stayed in a camping spot in a town called Warmquelle, it had its own little waterfall and natural swimming pool. After eating we went to the pool to watch the bats flying low over the water catching insects. The next day we went to the most northerly part of Namibia to visit Epupa falls. The north of Namibia actually seems like Africa, whereas the rest of Namibia feels like a German adventure holiday resort. In the north the Himba people still live in tribal villages and wear traditional clothes. We camped on the edge of the waterfalls and the children from the village came to talk to us and swim in the rock pools at the top of the falls. It really was an awesome experience. We are now heading east across the northern border of Namibia towards Botswana and Zambia, my foot doesn’t hurt too much, only when I stand up on the pegs, my wrist is fine unless I move it in certain directions but my ribs hurt most of the time, I’m taking painkillers which help. 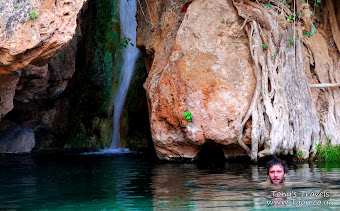