This week I finally sold the Transalp, after a month on sitting around in Lilongwe, going crazy from the boredom. I got a call on Tuesday from a guy who had seen my advert on Lilongwe chat, he came to see the bike and then a couple of days later he called back to say he would take it. He paid by bank transfer, which means I don’t have to take the risk of carrying £2000 cash around Africa. Then on Sunday, once the money had been in my account a few days, I took the bike around to his house to show him how all the bits fit onto the bike and where all the controls are.

It felt strange to hand over the keys, when I was in Zanzibar for 4 months, I didn’t use the bike and I didn’t miss it. Then I got on it again to ride to Malawi and as soon as I set off it felt good to be back on the bike. But it gave me the impression that I wouldn’t miss the bike once it was gone, well on Sunday I learnt that I would miss it, handing over the keys is a totally different thing to just not riding for a while. Plus I now have to carry all my stuff around in a huge backpack, its not very heavy but it is huge and awkward to carry. I may have to dump some stuff. 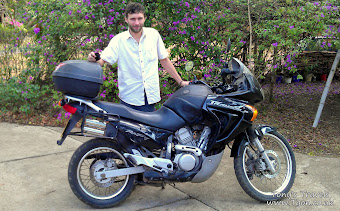 It seems like the bike sold at the right time because this week most of my friends who live in the compound have left. Ian returned to Belgium and my Pakistani friends have moved out. That and the fact that I started to see through QB’s friendly exterior to his less than trustworthy self. But there were some really nice things that happened this week too, firstly I met up with a German couple I originally met in Greece while waiting for a ferry to Italy, my trip inspired them to make their own trip through Africa by motorbike. I also met up with Belgian Tony, we originally met in Morocco and travelled together to Mali, he was heading north to Nairobi to fly home. So I am happy to say that Sunday was not only the end of my 70th week, but was my last day in Lilongwe. I can now finally get back to my favourite place, Cape Maclear, to clear my head.