OK, so technically Western Sahara and Southern Morocco is the same place, but when I say Southern Morocco I mean the part before you reach Western Sahara. So, This week we I have travelled south with Tony. From Agadir we headed to Legzira and stayed in a very basic hostel. They only had electricity after dark when they turned on the generator. We were on a beautiful stretch of beach and it was nice and quiet.

Our next stop was Tan Tan, a small town on the road to Western Sahara. After looking at a couple of hotels we managed to find a nice place, cheap and clean. Plus the receptionist was friendly and spoke good English. Tan Tan is well known to travellers on this route as a trap for traffic fines. There is a roundabout on your way out of town which doesn’t work like a normal roundabout. It actually works like a T junction. If you don’t stop at the stop sign (written in Arabic) then you get a 70 Euro fine. Luckily we knew about this and made sure we stopped.

After Tan Tan our next stop was Tarfaya, we slept in a nice hotel across from the port before we headed off again. The next night we stayed in a camp site near coast and met a few other travellers in camper-vans. Some heading north after visiting Senegal, others heading south like us. The road south is long and the landscape is dry and empty, occasionally you see sand dunes and camels but most of the time it is dry rocky ground. 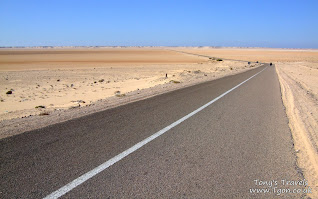 On Thursday we arrived in Dakhla, a city on the end of a peninsular, the last city before the Mauritanian border, still 350 Km away. The city is the nicest city in Western Sahara, some great beaches and no hassle from people selling things in the street. We stayed there for two nights, on the second day Charlie arrived. He had managed to get his Mauritanian visa and caught us up ready for the border crossing. 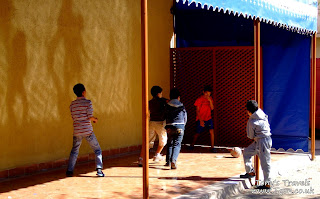 Tonight the three of us are heading out of town looking for a place to camp, then tomorrow we plan to cross the border into Mauritania.