It has been over a week since I last added a post, it feels like it has been a long time, a lot has happened. On New Years Eve we were camping on a beach just outside Dakhla in Western Sahara, we bought some fish and chicken from the market and we cooked them on the camp fire. Afterwards we headed to the other side of the camp site to a large camp fire and another group of campers, an old hippy couple gave us some cider and hash brownies. We had spent a couple of hours, earlier in the day, trying to find alcohol but didn’t find any. Luckily the other campers shared their alcohol with us and we got quite drunk, one guy had made some grain alcohol mixed with herbs and sugar cubes. It was around 90% alcohol and tasted foul but we had a few. On New Years Day I woke up with a hang over and we decided to stay on the beach for an extra day before heading to Mauritania. 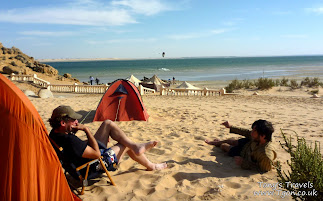 The border crossing into Mauritania was crazy, first we had to leave Western Sahara, this involved one guy giving us a form to fill in, we then gave the form and our passport to another guy who kept the form and checked our passports. We then had a guy check our vehicles against the laissez-passer, We then took the laissez-passer into an office where a guy made sure we had been to have it checked, then another guy stamped it. Then we drove through two check points where our passports and the laissez-passer were double checked, then finally we got to the last checkpoint where all the details of our passports and laissez-passer were written down. Between the Western Sahara border and the Mauritanian border is around a 5km stretch of wild, sandy track which is not maintained by either side. This track is dotted with burnt out cars and scrap metal. Entering Mauritania was fairly simple, first our visa was checked, then we got a laissez-passer for around 10 euro covering 7 days in the country, then we had our passports scanned by immigration, then we got temporary insurance for 14 euro lasting 10 days. We stayed in Nouadhibou for a night before heading to the capital of Mauritania, Nouakchott. We applied for our Mali visas (costing 17 euro) then headed east. 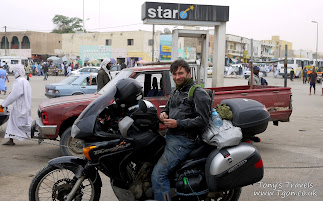 Mauritania is a hot, dry, dusty country consisting of mostly empty desert, the roadsides are littered with the rotting corpses of camels, goats, donkeys and cows. We drove through it for five days, stopping for rest in towns along the way. This was mostly fine, but there is very little petrol available in Mauritania and we almost ran out, we had slept in Aleg and had planned to refuel in the morning, but there wasn’t any petrol, so we headed off towards Kiffa. Half way there we stopped in a small town which also had no petrol, luckily we met a guy who managed to get us 20 litres of petrol for around 3 euro a litre (about triple the normal price). This was just enough to get us to Kiffa, where luckily they had petrol. 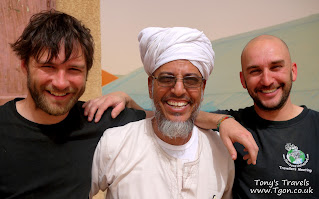 The road from Kiffa to Ayoun El Atrous was under repair, this meant that we had to take a detour which was a dusty, sandy track through the countryside. The first half of the journey was fun, but then I went through a particularly big hole which jolted the bike so hard that my top box snapped off its fixings. I stopped and reattached it using bungees and carried on. Then the road was tarmacked again, but there were places where the road was covered with sand. In a particularly large sand pit the bike got stuck and the engine cut out, I tried to start it again and the electrics cut out, I was stuck. I waited a few minutes and a car came along, four guys got out and helped me push the bike out of the sand. I stripped the bike and checked the battery, it seemed ok, I tried to start the bike and it started. I thought that was the end of it and drove the rest of the way to Ayoun El Atrous. 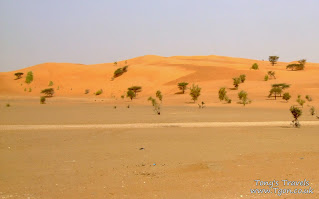 After a night in Ayoun El Atrous we headed to the border with Mali, one of the police at a road block warned us that the area had a lot of Al-Qaeda, so we should be careful. Everything seemed ok and we were soon at the border, on the way out there was a checkpoint where out passports were stamped, the guys there asked for 14 euros each for stamping our passports, we said we wanted a receipt, they said they had used them all but would have more at 4pm, we said we would wait and made ourselves comfortable, they said we could go, scam avoided. But as I tried to leave the bike wouldn’t start, the electrics were failing, after a few minutes I managed to start the bike while banging on the side which holds the battery. We then went to the next check point and had our laissez-passer checked and out passports scanned. Then we entered Mali, the first checkpoint checked our visa and stamped our passports, then asked for 15 euro for the stamp. We refused and they let us go, another scam avoided. We then had to go to get our laissez-passer and paid 22 euro for it, they gave us a receipt so we paid. Then we got insurance for Mali, Ghana, Togo, Benin and Nigeria for two months for 40 euro. We then tried to head south but were stopped at a police check point and sent to the police station. We were then told we had to pay 7.50 euro each for another stamp or we couldn’t leave town. We tried to argue for a while but then eventually we caved and paid up, we were hot and tired and couldn’t argue. The bike was acting strangely, the rev counter was jumping around wildly and a few times the bike lost power and back-fired loudly, I banged on the side and it sorted itself out. 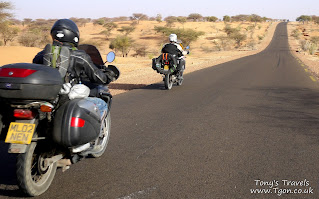 We spent lastnight in a small town called Diema with an English woman called Pam, she runs a NGO there which helps the community. It was great to pass into what feels like a real African country after the dry, dusty countries in the north. This morning I checked out the electrical problem, luckily it was just a loose battery connection. We then drove to the capital of Mali, Bamako, where we will try to get visas for Burkina Faso, Ghana and Nigeria. I’ll also try to securely reattach my top box. 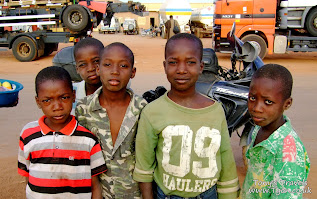