It has been an action packed week, we set off from Ouagadougou in Burkina Faso, travelled the full length of Benin and the width of Togo. We left Ouagadougou after collecting our Visa Entente, driving towards the border with Benin. It was getting late so we stopped just before the border in an expensive hotel overlooking a lake, we managed to negotiate camping and a meal for 7 euro each and were surprised by the wonderful three course meal we were then served. A great night.

The next day was quite short as far as travel, we headed over the border to camp at a waterfall. The border crossing was really easy with no bribes, only 9 euro for the laissez-passer and then we were free to continue. We noticed a crowd of people under a tree and went to investigate, it turned out that a doctor was giving out Meningitis immunisations so Charlie decided it was an excellent opportunity to get a cheap injection, I donated a large handful of sweets for the kids after they had their injections. From the border we headed into the first town and turned onto the piste to the safari park, but instead of entering we just went to the waterfall to swim and camp. 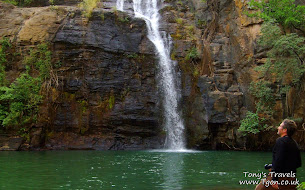 The next day was quite hard, we rode around 500Km south through Benin to a city called Abomey. We spent the night and some of the next day there, the guide book had said that it was a ‘must see’, but we disagree. It was here that my stomach started to feel a little strange. After a fruitless wander around Abomey we headed south to the beach and stopped in a town called Grand Popo. I stopped on the way there because I was feeling faint, so I bought a cold Fanta and some water before I set off again. By the time we arrived I was feeling really rough so I decided to take a room rather than camping.

The next few days were great, we chilled out at the beach, swam in the ocean, sat by the pool and befriended a couple of local guys. It turned out that they were looking after a hotel which was still under construction, we joined them for our meals and spent our evenings drinking and chilling out with them. Our last night in Benin we actually stayed in their hotel. 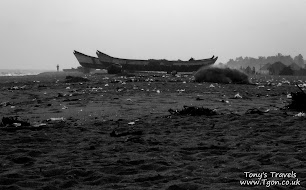 Yesterday we left Benin and headed over the border into Togo, we are now staying in the capital, Lome, for a couple of days before we head north into the mountains and then west into Ghana.