Week 48 started well, we managed to get our bikes into Dar es Salaam port and onto a ship. Once the bikes had been secured we headed to the ferry terminal and took a ferry to Zanzibar. We hoped to get the bikes off the ship quite quickly the next day and head to Makunduchi, unfortunately the process took around 9 hours, so when we got the bikes at around 6pm, just before sunset, we decided to stay another night in Stone Town. So on Wednesday morning we set off from Stone Town to Makunduchi. We arrived just before the end of school (1pm), it was a great feeling to drive my bike into the school and see my friends for the first time in six years. We talked about the changes in the school and took a walk into the village to see my friends new son. 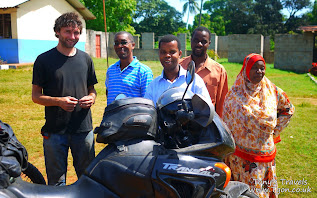 Although we had an offer to stay in the school house, we decided that we would prefer to sleep at the beach, so we drove down to the beach and walked around looking for a good spot. While we were walking on the beach we met a guy who worked in the one hotel in Makunduchi and he offered to give us a tour. Swimming in the pool was a Dutch doctor who is doing some charity work in the local hospital, she offered to let us stay in her spare room for the night. The next morning we headed off to Jambiani for a few days, but agreed to meet the Dutch doctors again, during the weekend, to swim with dolphins in Kizimkazi. We camped the beach next to a bar for a few days, enjoying the beach, and took a trip out to the coral reef to do some snorkelling. 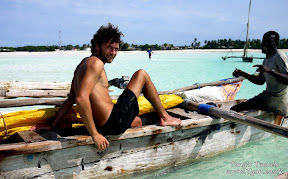 On Saturday the Dutch doctors arrived in Jambiani and decided to stay there a night so that they could watch a football match. The guy we had met on the beach in Makunduchi actually lived in Kizimkazi so I managed to negotiate to get the four of us out on a dolphin trip very cheap (around 8 US dollars each). I had been swimming with the dolphins a few times before but this time there were around 15 dolphins, so it made for an awesome experience. On the way back to the shore we stopped to snorkel for a while, I found a huge Triton Shell Sea Snail and our captain said he wanted to take it back to shore. We got back to the village and ate the snail with rice and a coconut sauce. 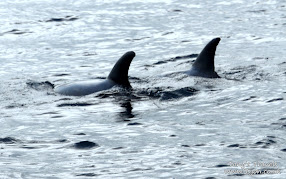 After lunch we took the doctors back to Makunduchi and headed to Nungwi, on the way north we went through a police check point, Charlie was arrested because he didn’t have the correct permits to drive in Zanzibar, but they let him go when he signed a bail agreement. When we arrived in Nungwi I managed to negotiate some cheap accommodation in a bar which is not currently open for business, the guard had a pet monkey which he let me care for while I was in the area. The next morning Charlie drove to the court to see what punishment they would give him, in the end he just had to pay a bribe to the police and then buy the permits. We spent a few days around the beach, swimming and snorkelling. The best place for snorkelling is a small island called Mnemba Atoll, again we managed to negotiate a cheaper price (13 US dollars instead of 20). The snorkelling was great and we stopped on the beach for lunch before going back to Nungwi.

From Nungwi we headed back to Stone Town so that Charlie could take a ferry back to Tanzania. Charlie left on the Thursday and I headed back to Makunduchi. On my way down to the beach I bumped into two old friends, one of them is now the manager of the hotel on Makunduchi beach, he offered to let me stay there for free so I agreed. I have been there since Saturday but hope to move back into my old house in the village soon. My money has pretty much run out but I have three life-lines which I am looking into. Firstly there is the 450 Euro which the Namibian government still owes me, I have actually heard from them and they are ready to do a bank transfer. Secondly, I need to sell my motorbike, I can concentrate on this a little more once I move back into my old house and can unpack and carry out a few minor repairs. Thirdly, I have heard about some temporary teaching work which pays around 600 US dollars a month. While this isn’t much money, it is actually enough to live on with some left over to save. At the same time I need to start planning my time in India, I need to find a job before I can apply for a working visa so I need to find something soon.