I started week 51 by moving out of the hotel and back into my old house in the village. There was also a guy called Mohammed arriving from England on the same day, he will be here for two months to teach in the school, his time here was organised through Zanzigap. We spent the first week travelling to the neighbouring villages and looking around the school. Mohammed was observing classes in preparation for his own lessons, I was waiting for confirmation of my own teaching job. About half way through the week my job was confirmed and I was asked to start as soon as possible. Unfortunately I started to feel ill towards the end of the week, at first it was just stomach cramps which I ignored thinking it was the normal kind of stomach issues people have from time to time when travelling. At the end of the week Mohammed’s brother arrived for a holiday, the first night he stayed in town, then the next day we went to Jambiani. 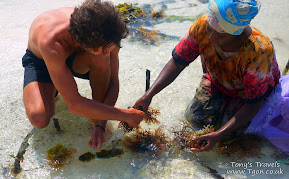 By the time we got back from Jambiani I was feeling worse, the stomach cramps were now joined by headaches and fever. As I’m not taking any anti-malaria medication I have been on the look out for fever as this is one of the symptoms of malaria. I decided to go to the hospital and get a malaria test, it was negative, but I told them that I had been to Malawi recently and could possibly have got Bilharzia while I was there. Luckily I had already bought the medication in Malawi and was planning on taking it soon anyway. They told me to take the pills and see how I felt after a few days. The Bilharzia treatment is a one time dose, the size of which depends on your weight, the pills flood your bloodstream and kill the parasites, but can also cause stomach cramps and headaches. Luckily I didn’t get the stomach cramps but I did get a terrible headache, I spent the day in bed trying to sleep through it.

It has been a few days since I took the pills and I am feeling better, now the only problem is that I haven’t eaten properly for a week and have lost weight. I just need to cook myself some nutritious meals and I should be fine. Obviously I haven’t started teaching yet because I have been ill, but I should start teaching this week. As for my other arrangements, the Namibian government have transferred my money and I have had a couple of offers on the bike. The offers were a little lower than I am looking for (about £200 lower) but I’m in no hurry yet. As for making arrangements for India, I met a girl who spent some time working for an organisation in northern India, she sent an email to one of her friends there who has offered a job. We haven’t talked about wages yet but I have time to look for other jobs if this one doesn’t work out, at least it’s a start.