Week 133 wasn’t very eventful, I spent some time working and then made a bit of a mistake. I got my shifts mixed up at work and ended up being about 40 mins late for work. Unfortunately they had already covered my shift by the time I realised and called them. They then cancelled my remaining shifts, in effect firing me. It seems a little harsh, but there are lots of people in Melbourne who want to work, so they feel that they can pick and choose and drop anyone at the first sign of weakness. So I didn’t get to work during my final week in Australia, but on the bright side, it also meant that I didn’t need to quit. While I wasn’t working I spent some time looking into the process to claim my tax back and also my Australian pension that I have been paying into while working there. That should get me a couple of thousand dollars for my trip. 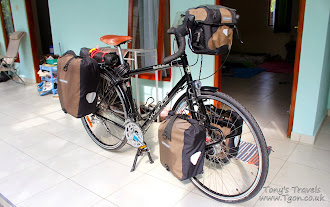 I flew out of Melbourne on Sunday morning and arrived in Bali late in the evening. This didn’t go very smoothly either, I was 5Kg over my weight limit and had to pay $200 or leave my bike behind. The woman at the checking counter said “Well I guess you will have to pay, you can’t leave your bike behind” and then she chuckled. I’m not sure if a wealthy customer would have found that to be friendly, light hearted customer service, but it definitely pissed me off. The day didn’t really improve either. I didn’t have any food on my flights as the food was expensive, then during my transit in Kuala Lumpur, I was forced to buy some strange sweet bread hotdogs to tide me over until I arrived in Bali. As soon as I got out of the airport I relaxed. The atmosphere here is just what I have been missing in Australia. Busy streets with lots of people on small scooters, small stalls selling cheap food and drinks, interesting building designs and a new language, in other words a culture that isn’t the same as England. My plan was to build the bike at the airport and ride it to my CouchSurfing hosts place, but I was tired so I decided to take a taxi and build the bike in the morning. I might start posting weekly again, so hopefully I will have lots of new pictures and videos uploaded soon.