I didn’t manage to post last weekend due to the lack of a reliable internet connection while travelling. Week 27 was a strange mix of complications and solutions, some things proving more difficult, and others much easier, than first thought. We arrived in Bamako and checked in to the Sleeping Camel hotel and camp site, we were hoping to stay for a few days to get visas and fix a few problems with the motorbikes. We had not been here long when we met a group of people who had been waiting ten days for their Nigerian visa, then we heard that Nigeria had closed its borders. This is quite a big problem as there is no good route around Nigeria, but a solution is in sight. We met a German couple in Mauritania who were planning to ship their bikes from Ghana to Nigeria. At first I didn’t want to do this as it would involve skipping five countries on the way. But the more I thought about it, the more it made sense, three of the five countries are ‘problem countries’. Firstly Nigeria, with its recent killings and general dangers. Secondly DRC, with its new visa application system which would mean sending my passport to the UK while I stayed in Congo, then thirdly, and possibly most troublesome, Angola. Angola has been refusing people visas, this would force me to either ship the bike around the country, fly the bike over the country, or travel around the edge of it through jungle roads in the DRC. So I am planning to ship the bike, this isn’t simple either, it looks like I will now need to apply for a carnet de passage, a document I had previously decided not to get as it was expensive and not really necessary. 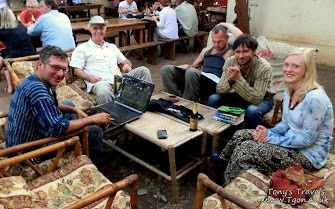 On a more positive note, we went to the Ghana embassy to apply for our visa, knowing that technically we weren’t allowed to apply outside our home country. We made an appointment with the ambassador and eventually we were welcomed into his office, we talked for a while and then he explained that he isn’t supposed to give foreigners a visa, but in some cases he can use his discretion, he asked us to leave our passports over night while he made some calls on our behalf. The next day we picked up our passports with the visas inside, we took them straight to the Burkina Faso embassy and got our visas with their same day service. We spent our evenings meeting with lots of other travellers, including Richard Meek, an English guy I have been in contact with for a while now, and a French guy who is quite well known, among overland travellers and adventure motorcyclists, because he travelled the jungle roads in DRC, which I mentioned earlier, alone. We went for drinks and meals and generally had a good time.

From Bamako we headed north to spend just over a week exploring central Mali, we started out by taking a piste from Bamako to Segou. The track followed a canal for a while then slowly faded into donkey tracks through the bushes. It was slow going but really fun and we got to see lots of small villages which tourists rarely visit. Eventually we emerged from the bush, back on a tarmac road and followed it to Segou where we stayed for the night. 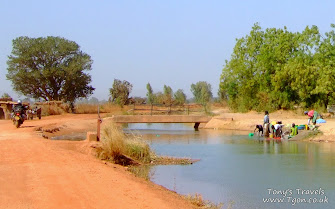 The next two days were spent travelling on more piste from Segou to a town called Djenne, the track followed the Niger river and cut through the flood plane. The road was flooded in places and we had to do some water crossings on the bike, first time for me, luckily I didn’t topple over and everything went smoothly. We spent a night camping out in the bush before heading the rest of the way to Djenne. 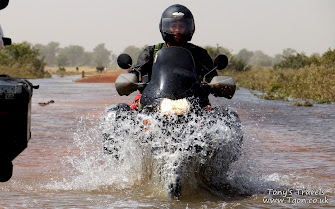 Djenne is mostly visited for its large mud mosque, we stayed in the town for a few hours while Charlie got a bash plate made and fitted to the underside of his bike. Then we took the tarmac road north to Mopti. We only stayed here a night to see what the town was like but decided to take a boat ride on the Niger the next day. 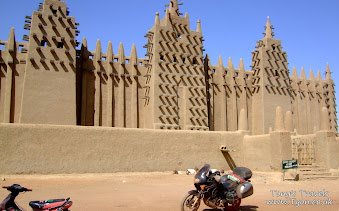 From Mopti we headed to Bandiagara, a small town on the edge of Dogon country. This is the starting point for anyone wanting to explore the area. Dogon country is an area of rocky cliffs inhabited by a tribe known as the Dogon, we planned to trek through the area for a few days. The road up to Bandiagara was pretty awesome so we stopped for a while to take some pics before carrying on to the hotel. Luckily we managed to take up some spare seats on a minibus to take us out to the start of our trek the next morning. We spent three days and two nights trekking through Dogon country, sleeping on the roofs of mud houses looking up at the stars. The first night we stayed in a village up on the top of the cliffs, before heading down to the foot of the cliffs to sleep in a village down there, visiting a few other villages on the way. The villages at the foot of the cliffs are overlooked by old mud huts in the cliffs, the lower ones were lived in by the Ogon, elders chosen by the village to live on the cliff and communicate with the people living higher up. These people were the Telem, a tribe of pygmies who lived in tiny huts high on the cliff. The Telem are now gone but the huts are still there to be seen. 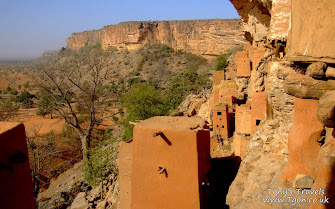 Our guide was a great guy and he had asked if he could have my black leather bush hat, so before we left I traded it with him for a bracelet and some other souvenirs. Then we headed back to Bamako, sleeping in Bandiagara and Segou for a night each on our way down. There is a music festival going on at the moment here in Bamako so we are heading out tonight for some drinks and hopefully a great night.