Charlie and I arrived back in Bamako last weekend in time for a music festival which was taking place close to the hotel we stay in. The festival was really good, live music, beer, food and a good group of people. We then spent a few days relaxing around Bamako, moving between our hotel and another one close by. It is amazing how you meet people when travelling, it seems that most people are headed along the same route but at varying speeds. Here in Bamako it seemed that most of the people we have met on our way down from Morocco, arrived here around the same kind of time. It has been a nice chance to socialise and mix with different people for a while. We then decided that we wanted to go to visit a waterfall in a nearby town, originally it was just me, Charlie and Tom, but then there were seven of us. Matt, a guy who has just completed a rally in his Ford Fiesta, Lucy, a girl who is working as a tour guide, Pierre, a cool old hippy guy who we have met several times during his holiday and Jaimee, an Australian girl who was been travelling for six months by bicycle. Then when we arrived we found two people we already knew were staying at the waterfall too, so there was a group of ten people, including our guide. 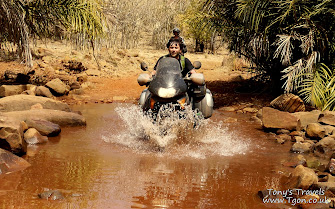 The waterfall turned out to be amazing, nice clear water to swim in, lots of rocks to sunbathe and we managed to get permission to camp close by. We stayed for two nights, swimming by day and sitting around the camp fire at night. The second night we bought two live chickens which we slaughtered and butchered ourselves, then I made a stew with them. I could have stayed there for a week or so but we had to get back. Bamako seems loud, hot, polluted and generally not as nice as it did a few days ago. Now we are planning to head into Burkina Faso over the next week, hopefully camping by a few waterfalls on the way. 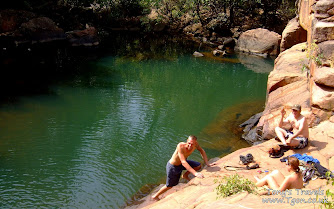