On Monday, Charlie arrived at around lunch time and we went for some pizza in ‘The Raft’, a restaurant on the Walvis Bay lagoon, afterwards we walked into town and met four of the other people who shipped their bikes with us. Everyone checked into the hotel where I had been staying so that we could sort out the customs stuff for the bikes.

On Tuesday morning we went to the office to hand over all our documents and were hoping to get the bikes that afternoon, we waited in the hotel all day but nothing actually happened, so we had a BBQ instead. The next day the container was ready to be opened, we all went down and unloaded the bikes. I was the only person who doesn’t have a Carnet de Passage, so I had extra paperwork to do in order to get a temporary import permit. This also included me leaving a 400 Euro deposit, which will be refunded once I leave Namibia with the bike. It was during the unpacking of the container that I realised my digital camera is broken, last weekend when I was on the sand dunes some sand has gotten into the zoom lens and it is now jammed, but we have our bikes back and Charlie is lending me one of his cameras, so overall it was a good day. 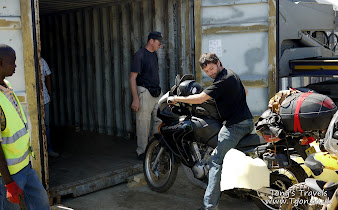 We were hoping to leave Walvis Bay on Thursday, but first I needed to do some work on the bike. The clutch lever had been broken during the journey in the container and I have been having some electrical problems since Greece, plus I wanted to do a service on the bike. It took a lot longer than expected to get hold of some oil, an oil filter, a new horn, a replacement clutch lever and some chain lube, so we got back to the hotel at sunset and I did all the work by torch light. Then on Friday we finally left Walvis bay, firstly driving north a little way to see some nicer beaches, then refuelling before heading east. We planned to travel through some mountain passes to end up in southern Namibia to do some camping, but while we were driving Charlie started to have some problems with his BMW F800. We decided to continue east to Windhoek so that he could get it repaired. We are now in Windhoek staying in a hostel called the cardboard box, hopefully the repairs wont take long and we can head south this weekend.