Happy New Year guys, it has been a few weeks since i last posted on here, during that time we have had Xmas and New Years Eve. For Xmas we went down to the beach with some beers and some food for a BBQ, then in the evening we had a party with the Tiger Trolley on the beach. Then on New Years Eve we went to a friends place for dinner, then to a huge free party in a park. Both really good nights that took a while to recover from.

I worked a couple of shifts in a restaurant and earned a little bit of cash, but I still haven’t found a full-time job. I was thinking of flying to Darwin next week to try to work there for my last month before I leave Australia, but after speaking with my friend Luca, I have decided to have one last try here in Melbourne. So this week I am handing out a new CV to every place I can find. Unfortunately the fact that I haven’t been working for the last two months has meant that I have had to make a change to my route plan. I was hoping to travel up the east coast of Australia for a couple of weeks before heading to South East Asia, but now I think I will try to pass through the east coast on my way to New Zealand, after I have travelled through Asia. This is so that I can work up to the last days of my visa, but also because when I look at the costs of travelling up the east coast, that money could last for so much more time in Asia that it doesn’t seem worth it at the moment. 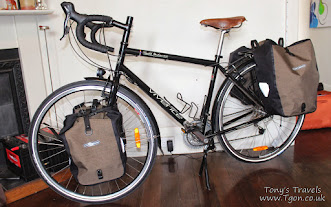 In my last post I mentioned that I had received confirmation of sponsorship from a company called Vivente who make touring bicycles. Well I now have my new bicycle and most of the equipment that I will need for my trip through Asia. I will be writing a page about all my equipment soon. I took it out for its first ride a couple of days ago, heading along the coast on a 60Km ride with Luca. I’m really looking forward to actually setting out on the bike and I’m sure that I will look at the bike very differently after a few weeks on the road. I also added the first of my information pages, which describes the illnesses and injuries that I have experienced in my trip. I will keep adding more information to this as time goes on and I get new experiences. If you would like to read a little about the less glamorous side of traveling, you can find it by (clicking this link), or looking under the info tab on the menu at the top of the page.