It has been a long time since I did my last blog post, mostly because I haven’t been doing anything particularly interesting. Not that I haven’t been enjoying my time here, I have, but its not really anything worth writing home about. I have been living in a nice big tent in the backyard of one of the coolest places I have stayed. The constant stream of new people coming and going, from different places all around the world, give the house a great atmosphere. I really do count myself lucky to have found this place at the start of my time in Australia. But the weather has changed in Perth, we are now in the middle of the coldest time of year (which isn’t really all that cold), combined with the fact that I have spent 5 of my 12 months here in Perth, I feel that it is time to move. 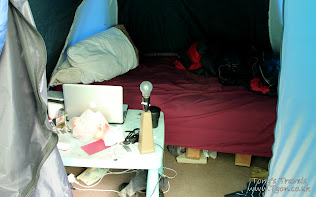 I am still working for the Department of Water doing IT work for them and managing to save a reasonable amount of money each week, but this job is ending at the end of the month, so I will be looking for a cheap way to travel north along the west coast of Australia and up into the Northern Territory. I’m hoping to find a car of travellers who have a spare seat and we can just share the petrol costs.

Last week was the two year anniversary of the start of my trip, thank you to the people who sent me celebratory messages. I am still working on the site, writing the content, trying to catch up with myself, but I am looking forward to being able to add new pictures and videos as I move around Australia. Still a couple of weeks before that happens though.